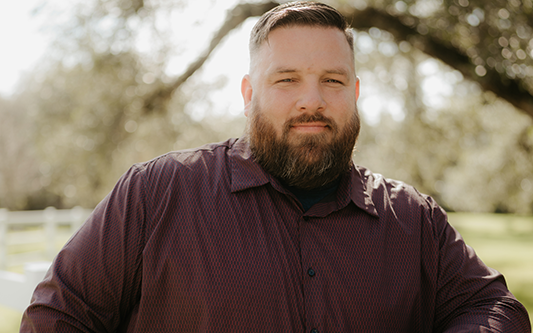 E-mail: robert@warriorempowerment.com
Robert is a 38 y/o native and long-time resident of Brazoria Texas where he lives with his wife Brandi and their children. Robert comes to us from a career in public service serving as a Police Officer with various agencies serving in a variety of supervisory roles and currently holds a Master Peace Officer license. He also has served in roles in emergency medical services and volunteer firefighting. Robert is a veteran of the United States Army Infantry where he served with the 1st Battalion 9th Cavalry, 1st Cavalry Division in Ft Hood, Texas. Robert Deployed in 2004 with his unit to Baghdad Iraq in support of Operation Iraqi Freedom. He currently volunteers his time serving with the Bay Area Council Boy Scouts as a scoutmaster with Troop 553 in West Columbia, and assistant district commissioner for the Cradle of Texas District.
Robert first came to the Warrior’s Refuge in early summer of 2021 serving as a volunteer campus pastor leading weekly church services, In August Robert came aboard full time working in the Warrior Empowerment Office and as the Campus Pastor.
Robert and his family are members of Victory Church of Brazoria, Texas where he serves as a safety team coordinator and prayer team leader. He currently holds a master’s degree in the administration of justice and security as well as a master’s degree in Christian ministry. In his free time, he spends time with his family working on their property, and with their horses and other livestock.